Product has attributes to select

Back to the product list
Go to product page
Scroll
Take a virtual walk around our shop
NEW! 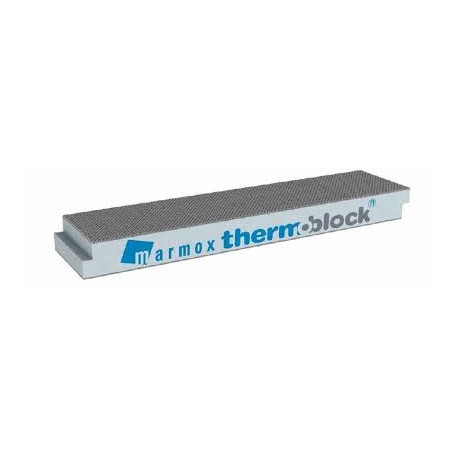 Marmox THERMOBLOCK is a high insulating, load-bearing, building block designed to replace the course of brick or block at the bottom of a wall. It practically eliminate the thermal bridge at this point and retain significant heat within the building structure.

This product is not sold individually. You must select at least 1 quantity for this product.

Although the Marmox Thermoblock is a lightweight product, it has a very high mean compressive strength of 9N/mm² making it suitable for supporting walls compliant with the Building Standards.

The most popular and effective application is to use just one row of Marmox Thermoblocks at the base of the inner leaf in the perimeter wall.

It can also be used in solid single leaf walls, outer leaves, party walls, at the wall/roof junction, parapets, beneath window and door frames and in other locations where cold bridges need addressing.

One of the worst areas of heat loss through a thermal bridge is where the floor meets the wall allowing heat to be transmitted to the outside. In this area up to 30% of heat in an otherwise well insulated room can be lost. This is the point where Marmox Thermoblock acts as a thermal barrier blocking that hear loss.

"The building fabric should be continuous over the whole building envelope and constructed so that there are no reasonably avoidable thermal bridges in the insulation layers caused by gaps in the various elements."

Be the first to write your review !

Products from the same group